This post is also available as a Jupyter Notebook on Github.

As part of a longer term project to learn Bayesian Statistics, I’m currently reading Bayesian Data Analysis, 3rd Edition by Andrew Gelman, John Carlin, Hal Stern, David Dunson, Aki Vehtari, and Donald Rubin, commonly known as BDA3. Although I’ve been using Bayesian statistics and probabilistic programming languages, like PyMC3, in projects for the last year or so, this book forces me to go beyond a pure practitioner’s approach to modeling, while still delivering very practical value.

Below are a few take always from the earlier chapters in the book I found interesting. They are meant to hopefully inspire others to learn about Bayesian statistics, without trying to be overly formal about the math. If something doesn’t look 100% to the trained mathematicians in the room, please let me know, or just squint a little harder. ;)

In Chapter 2 of the book, the authors introduce several choices for prior probability distributions, along with the concept of conjugate distributions in section 2.4.

John Cook has this helpful diagram on his website that shows some common families of conjugate distributions: 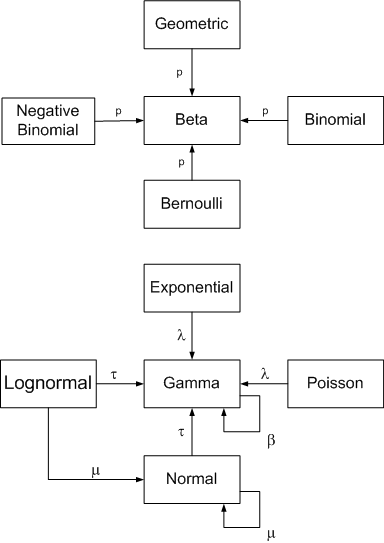 One of the better known examples of conjugate distributions is the Beta-Binomial distribution, which is often used to model series of coin flips (the ever present topic in posts about probability).

Thus, the probability $p$ of a coin landing on head is modeled to be Beta distributed (with parameters $\alpha$ and $\beta$), while the likelihood of heads and tails is assumed to follow a Binomial distribution with parameters $n$ (representing the number of flips) and the Beta-distributed $p$, thus creating the link.

This distribution is also known as the Negative-Binomial distribution, which we can think of as a mixture of Poission distributions.

If you find this confusing, you’re not alone, and maybe you’ll start to appreciate why so often we try to approximate things using the good old Normal distribution…

A perhaps even more interesting yet seemingly less talked-about example of conjugate distributions is the Dirichlet-Multinomial distribution, introduced in chapter 3 of BDA3.

In the wild, we might encounter the Dirichlet distribution these days often in the context of topic modeling in natural language processing, where it’s commonly used as part of a Latent Dirichlet Allocation (or LDA) model, which is a fancy way of saying we’re trying to figure out the probability of an article belonging to a certain topic given its content.

However, for our purposes, let’s look at the Dirichlet-Multinomial in the context of simple multiple choices, and let’s start by throwing dice as a motivating example:

Let’s first create some data representing 122 rolls of six-sided die, where $p$ represents the expected probability for each side of a fair die, i.e. $1/6$

Just looking at a simple bar plot of the data, we suspect that we might not be dealing with a fair die! 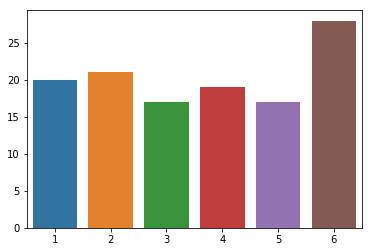 However, students of Bayesian statistics that we are, we’d like to go further and quantify our uncertainty in the fairness of the die and calculate the probability that someone slipped us loaded dice.

Let’s set up a simple model in PyMC3 that not only calculates the posterior probability for $theta$ (i.e. the probability for each side of the die), but also estimates the die’s bias for returning a $6$. We will use a Deterministic variable for that purpose, in addition to our unobserved (theta) and observed (results) random variables.

From the traceplot, we can already see that one of the $theta$ posteriors isn’t in line with the rest:

We’ll plot the posterior distributions for each $theta$ and compare it our reference value $p$ to see if the 95% HPD (Highest Posterior Density) interval includes $p = 1/6$. 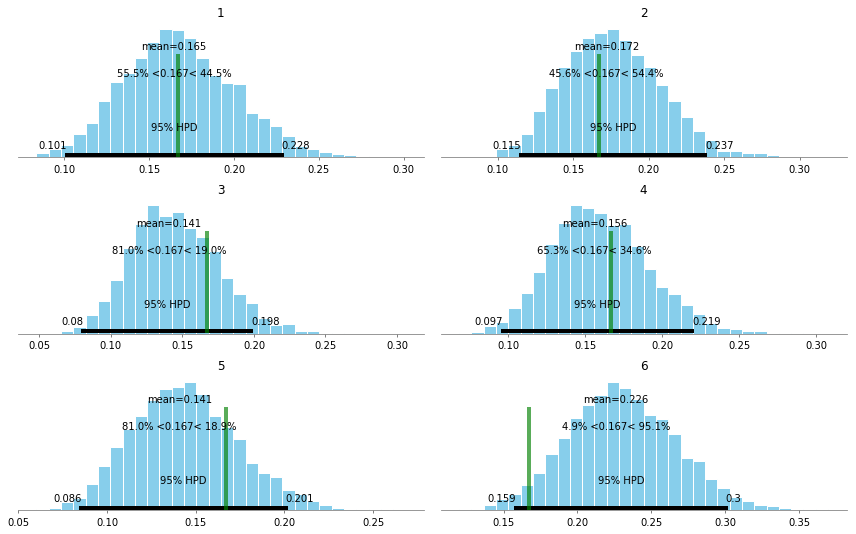 We can clearly see that the HPD for the posterior probability for rolling a $6$ barely includes the value we’d expect from a fair die.

To be more precise, let’s plot the probability of our die being biased towards $6$, by comparing $theta[Six]$ to $p$ 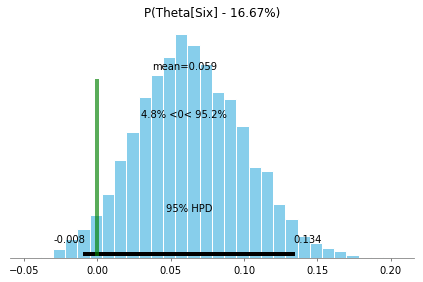 Lastly, we can calculate the probability that the die is biased towards $6$ by calculating the density to the right of our reference line at $0$:

Thus, there’s a better than 95% chance that our die is biased towards $6$. Better get some new dice…!

Let’s turn our review of the Dirichlet-Multinomial distribution to another example, concerning polling data.

In section 3.4 of BDA3 on multivariate models and, specifically the section on Multinomial Models for Categorical Data, the authors include a, little dated, example of polling data in the 1988 Presidential race between George H.W. Bush and Michael Dukakis.

Spoiler alert for those not following politics back then: Bush won by a huge margin. Since 1988, no candidate in a Presidential election has managed to equal or surpass Bush’s share of the electoral or popular vote. 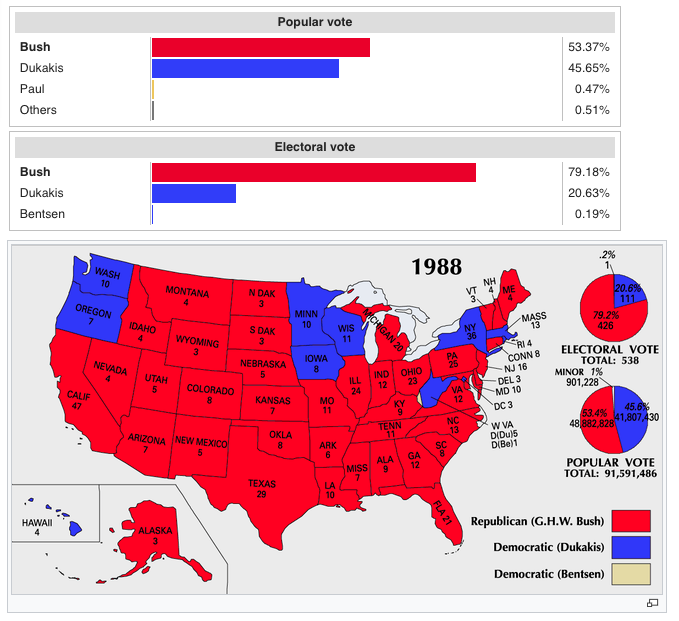 Anyway, back to the data problem! Here’s the setup:

We set up the data, where $k$ represents the number of choices the respondents had:

We, again, set up a simple Dirichlet-Multinomial model and include a Deterministic variable that calculates the value of interest - the difference in probability of respondents for Bush vs. Dukakis.

Looking at the % difference between respondents for Bush vs Dukakis, we can see that most of the density is greater than 0%, signifying a strong advantage for Bush in this poll.

We’ve also fit a $Beta$ distribution to this data via scipy.stats, and we can see that the posterior of the difference of the 2 $theta$ values fits a Beta distribution very nicely (which is to be expected given the properties of the Dirichlet distribution as a multivariate generalization of the Beta distribution). 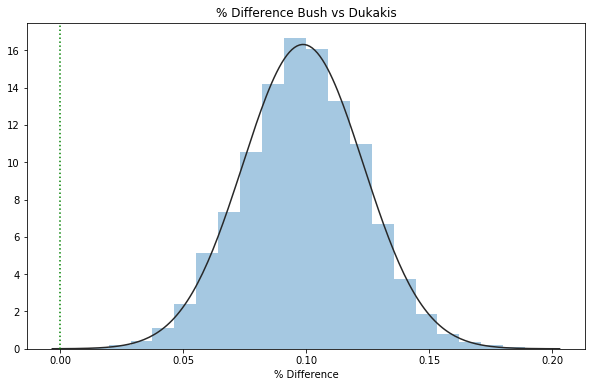 Percentage of samples with bush_dukakis_diff > 0:

As an extension to the previous model, the authors of BDA include an exercise in chapter 3.10 (Exercise 2) that presents us with polling data from the 1988 Presidential race, taking before and after the one of the debates.

Comparison of two multinomial observations: on September 25, 1988, the evening of a presidential campaign debate, ABC News conducted a survey of registered voters in the United States; 639 persons were polled before the debate, and 639 different persons were polled after. The results are displayed in Table 3.2. Assume the surveys are independent simple random samples from the population of registered voters. Model the data with two different multinomial distributions. For $j = 1, 2$, let $\alpha_j$ be the proportion of voters who preferred Bush, out of those who had a preference for either Bush or Dukakis at the time of survey $j$. Plot a histogram of the posterior density for $\alpha_2 − \alpha_1$. What is the posterior probability that there was a shift toward Bush?

Let’s copy the data from the exercise and model the problem as a probabilistic model, again using PyMC3:

Number of respondents in each survey:

Number of respondents for the 2 major candidates in each survey:

For this model, we’ll need to set up the priors slightly differently. Instead of 1 set of thetas, we need 2, one for each survey (pre/post debate). To do that without creating specific pre/post versions of each variable, we’ll take advantage of PyMC3’s shape parameter, available for most (all?) distributions.

In this case, we’ll need a 2-dimensional shape parameter, representing the number of debates n_debates and the number of choices in candidates n_candidates

Thus, we need to initialize a Dirichlet distribution prior with shape (2,3) and then refer to the relevant parameters by index where needed.

For models with multi-dimensional shapes, it’s always good to check the shapes of the various parameters before sampling:

The plate notation visual can also help with that:

Let’s sample with a slightly higher number of draws and tuning steps:

A quick look at the traceplot to make sure the model converged smoothly:

Let’s take a look at the means of the posteriors for theta, indicating the % of support for each candidate pre & post debate:

Just from the means, we can see that the number of Bush supporters has likely decreased post debate from 48.8% to 46.3% (as a % of supporters of the 2 major candidates):

Let’s compare the results visually, by plotting the posterior distributions of the pre/post debate values for % responses for Bush and the posterior for pre/post difference in Bush supporters: 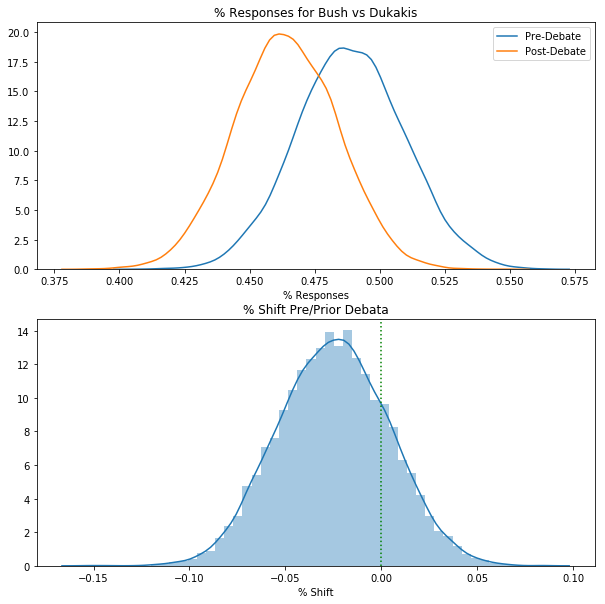 From the second plot, we can already see that a large portion of the posterior density is below 0, but let’s be precise and actually calculate the probability that support shifted towards Bush after the debate:

While that was a sort of round-about way to show that Bush lost support during the September debate, hopefully this illustrated the flexibility and robustness of probabilistic models (and PyMC3).

If you have any thoughts or feedback on this post, please let me know!

This post is also available as a Jupyter Notebook on Github.