Note: this post has been updated to include handling of 53-week years and refactors some of the calendar logic into a dbt macro for flexibility. Thanks for everyone’s feedback!

Working with clients in retail eCommerce, I’m often asked to analyze transactions along a type of fiscal calendar optimized for retail and merchandising. This is commonly known as the “4-5-4 Calendar”, because it groups weeks (Sun-Sat) into periods of 4, 5 and 4 weeks lengths.

From the National Retail Federation https://nrf.com/resources/4-5-4-calendar:

The 4-5-4 calendar is a guide for retailers that ensures sales comparability between years by dividing the year into months based on a 4 weeks – 5 weeks – 4 weeks format. The layout of the calendar lines up holidays and ensures the same number of Saturdays and Sundays in comparable months. Hence, like days are compared to like days for sales reporting purposes. The 4-5-4 Calendar also establishes Sales Release dates, which have historically been on the first Thursday following the month’s end. In recent years, however, as the flow of information has improved, more companies are releasing sales data earlier in the week.

For example, the retail year 2019 will start on February 3, 2019 and group the first few weeks of the year like so: 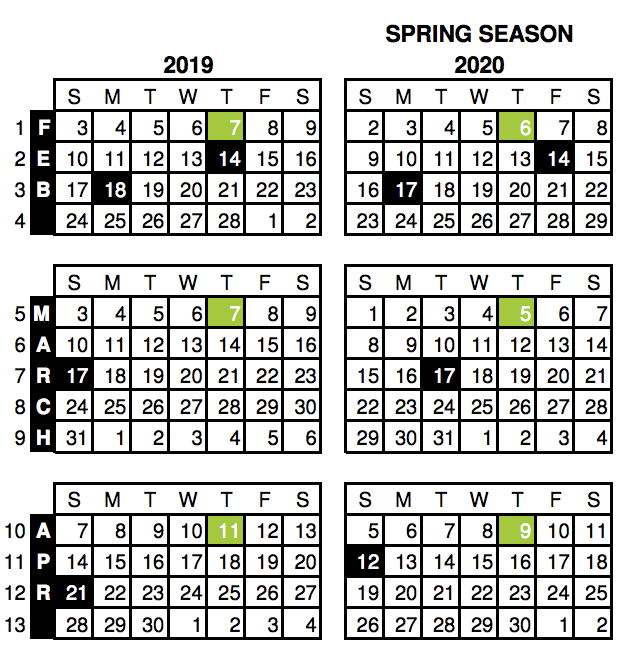 Also, some years have 53 weeks. Again, from the NRF:

Dividing the retail calendar into 52 weeks of seven days each, or 364 days, leaves an extra day each year to be accounted for. As a result, every five to six years a week is added to the fiscal calendar. This anomaly has most recently occurred in FY12 and FY17 and will occur in FY23.

Teasing apart some of this, we draw up the following rules:

Let’s explore how to create a 4-5-4 calendar using SQL for our data warehouse (we’re using Snowflake here, but this should be adaptable to Redshift or other platforms), and how to use dbt (our favorite data transformation tool) to make that easier.

Side note: if you’re not already using dbt. to manage your data transformations, we highly recommend you take a look at it for your Redshift, Snowflake or Big Query data warehouse projects. It’s been an indispensable tool for us over the last 18 months!

As good data warehouse practitioners, we of course already have a date dimension that contains past and future dates relevant to our business, along with descriptive attributes (Day of Week etc) and groupings (Week, Month, Quarter, Year) that help us create actionable analysis.

But, if we’re just starting out, we need to create a date dimension for our project. We will use the helpful date_spine macro from the dbt_utils package to create a sequence of dates. Then, we use standard SQL functions to attach a number of attributes we’ll use to create the 4-5-4 calendar.

Let’s start with our base dates model, dates.sql:

(This intentionally leaves out a ton of otherwise useful attributes such as Week, Month, Quarter etc. to help us focus.)

As we’ve seen, fiscal calendars usually, at a minimum, differ from the traditional calendar by their start and end dates. On top of that, weeks are often grouped into comparable groupings.

Since the 4-5-4 calendar is just one of the versions of fiscal calendars we might encounter, we’ll encapsulate some of the core logic behind determining fiscal year start and end dates in a dbt macro for extensibility.

In this macro, we essentially construct a calendar grouped into a fiscal year given by our end month (and end date logic discussed earlier) and fiscal weeks starting on our specified weekday.

Now, to group these weeks into the fiscal periods required for our retail calendar, we use this macro in a downstream model.

Using both our ephemeral dates model (i.e. we chose to not materialize this as a table or view at the moment) and the fiscal_year_dates macro, we can calculate the 4-5-4 attributes in a separate dbt model (thus, separating the 2 models in 2 files for better organization and reusability).

This then hopefully leaves us with dates and weeks properly grouped into their respective 4-5-4 periods. In production, we’d also add the relevant retail holidays, which will leave for a future post.

Let’s take a quick look at the output of this in Tableau, which matches up nicely with the “official” NRF calendar we saw earlier: 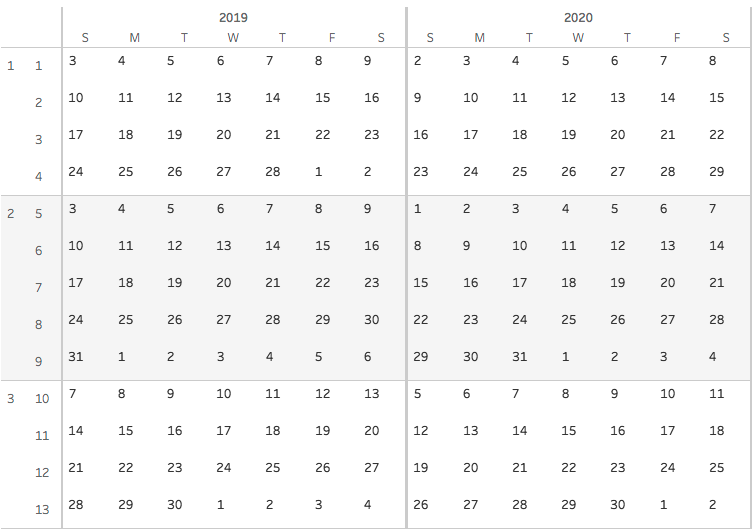 We’ll also check to make sure years with 53 weeks, such as 2017, roll up that week into period 12 as expected. 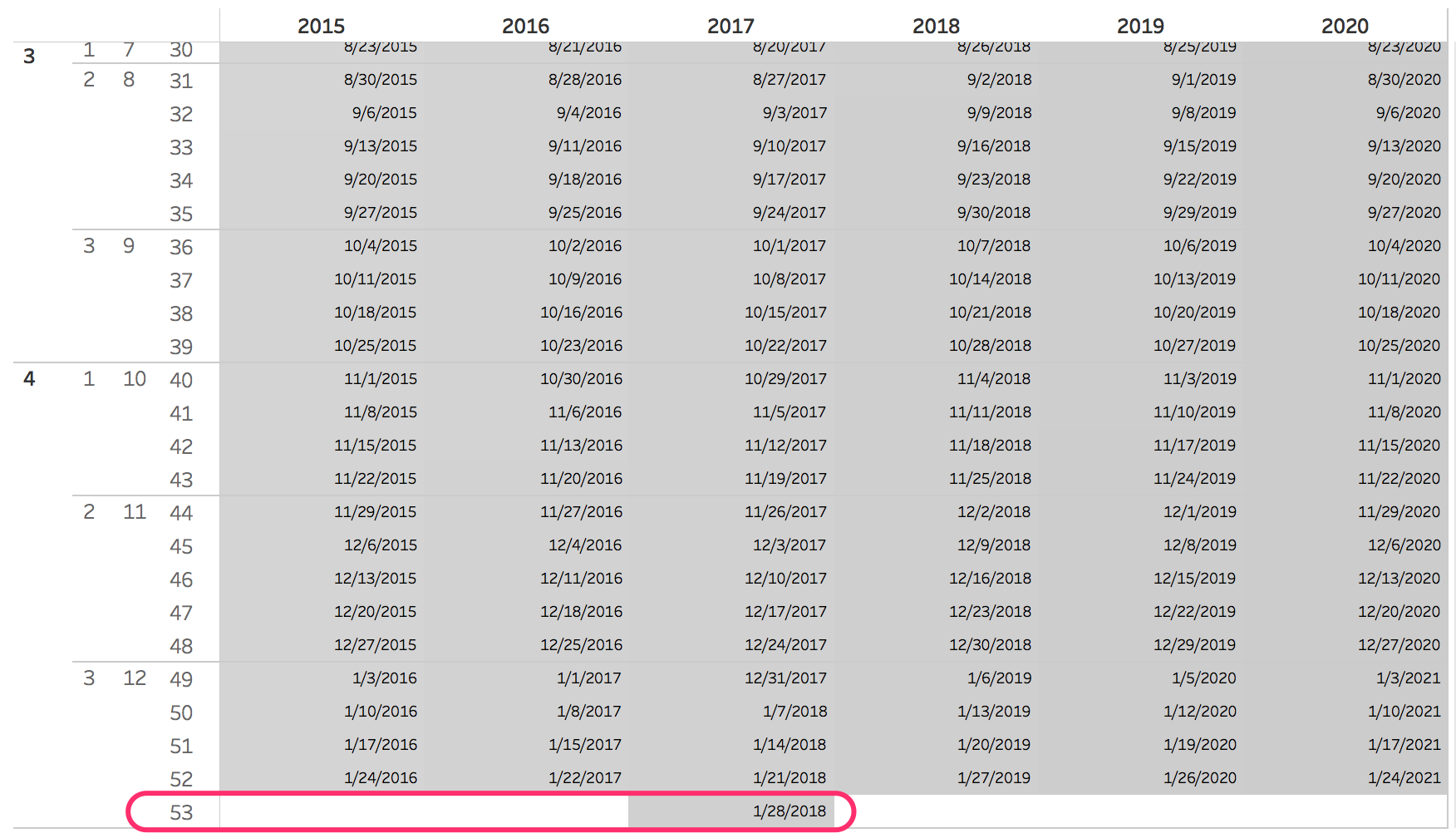 Note: some retailers retroactively restate years with 53 weeks. You can see an example of the effect of that on the NRF website here, where 2017 has been restated with only 52 weeks.

Lastly, some retailers and corporate finance departments use other variations of this, such as 5-4-4, which you should be able to implement with minor adjustments using this approach.